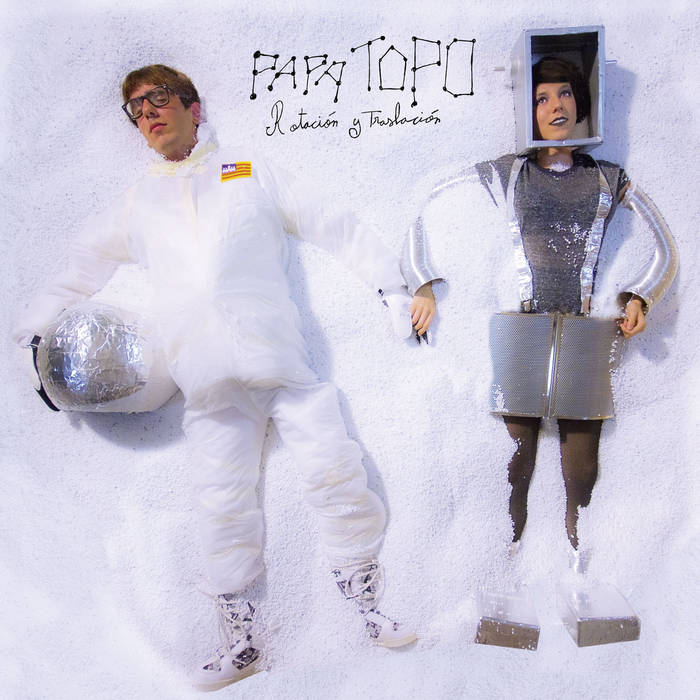 After two incredible, youthful, urgent singles that are already collector’s items, Adriá Arbona and Paulita Demaíz are still giving shape to their promising career full of future hits as successful as “Oso Panda”, “Lo Que Me Gusta Del Verano Es Poder Tomar Helado” and “La Chica Vampira” have been. Now, the duo from Mallorca is about to give us a series of Mini-LPs in 10” format that we at Elefant are going to begin to release to bring back this format that was so common in the 80s and that we liked so much – albums with 6 or 7 songs for a format that is becoming more relevant than ever with the way current music consumption is evolving.

For an event of such caliber, PAPA TOPO is delving into the more elegant aspect of their pop, keeping the dose of addictiveness intact and proving that, despite their young age, they enjoy the versatility and open-mindedness that few can boast, backed by a band of up to 15 members, including string and wind sections, the solid production of Gerard Civat, Manel Ibñañez and PAPA TOPO themselves. We have proof of this on “En Un Momento”, the song that opens this release, with a bit of Jeanette for that touch of soul (that wah wah, those trumpets), and a phrasing that occasionally reminds us of Teresa Iturrioz or Helena Miquel, and that ends as if it were one of Françoise Hardy’s most romantic songs. “Robot” begins as if it wanted to pay homage to THE RONETTES with lyrics that would delight our beloved PARADE, ending with a reminder of the most intense moments, among electric guitars. “Roselles I Esbarzers” is a delicious curiosity sung in Mallorquin that wanders between the vitality of SHOP ASSISTANTS and LA CASA AZUL to the poppier side of Soul and early LE MANS, and brings color to our memories and smiles to our faces.

The B-side opens with the infinite gem “Acomodador”, which could become a Spanish-language pop gem without much effort at all, with its ye-ye arrangements and its beyond-perfect melodies, cradled by dreamy string arrangements that have nothing to envy of the ones that Jane Scarpantoni did for Adam Green on that glorious “Friends Of Mine”. On “Siesta”, Adriá (who, by the way, is once again in charge of song-writing and arrangements for all the songs on the album) goes all-in for a “tight” piece with echoes of Chris Montez, bossa and lounge, among lazy phrasings and sassy, slow-eyed looks. To wrap things up, “Sanguijela” returns to the urgency, finding a curious but effective space between the period of ARCADE FIRE and the immediacy of the PEGAMOIDES, and Paulita’s last line, “Ya lo dijo San Mateo, no le deis perlas al cerdo” (San Mateo already said it, don’t waste your talents on people who can’t appreciate them), which takes us straight to the song’s culmination.

A Mini-LP in a delicious white vinyl that gives us an advance of the many unknown facets of PAPA TOPO, and that makes us think that Adriá and Paulita’s career still has so much for us to discover, and we are excitedly giving ourselves over to them, once again.